My life in Montreal after two months and a little bit

So, where did I disappear to? Well… this is going to be a long post.
I finally took the big leap, the one that had been slowly, menacingly dawning on my life since I finished high school. It took me about four years to find enough courage and resolve, but in the end I did it, I crossed oceans and moved to Canada.

I didn’t go to Toronto, like I had originally been planning, but to Montréal, the capital of Québec. That’s where Syn Studio’s Concept Art Diploma Program had been recently created. This 18 months intensive program is one of the world first focusing entirely on concept art. After I was selected I spent almost six months considering every possible implication, the responsibility of an expensive tuition, the uncertain outcome of this choice. But in the end, I simply couldn’t accept to prove myself a coward again. So be living as is dying! Eyes closed, I jumped. 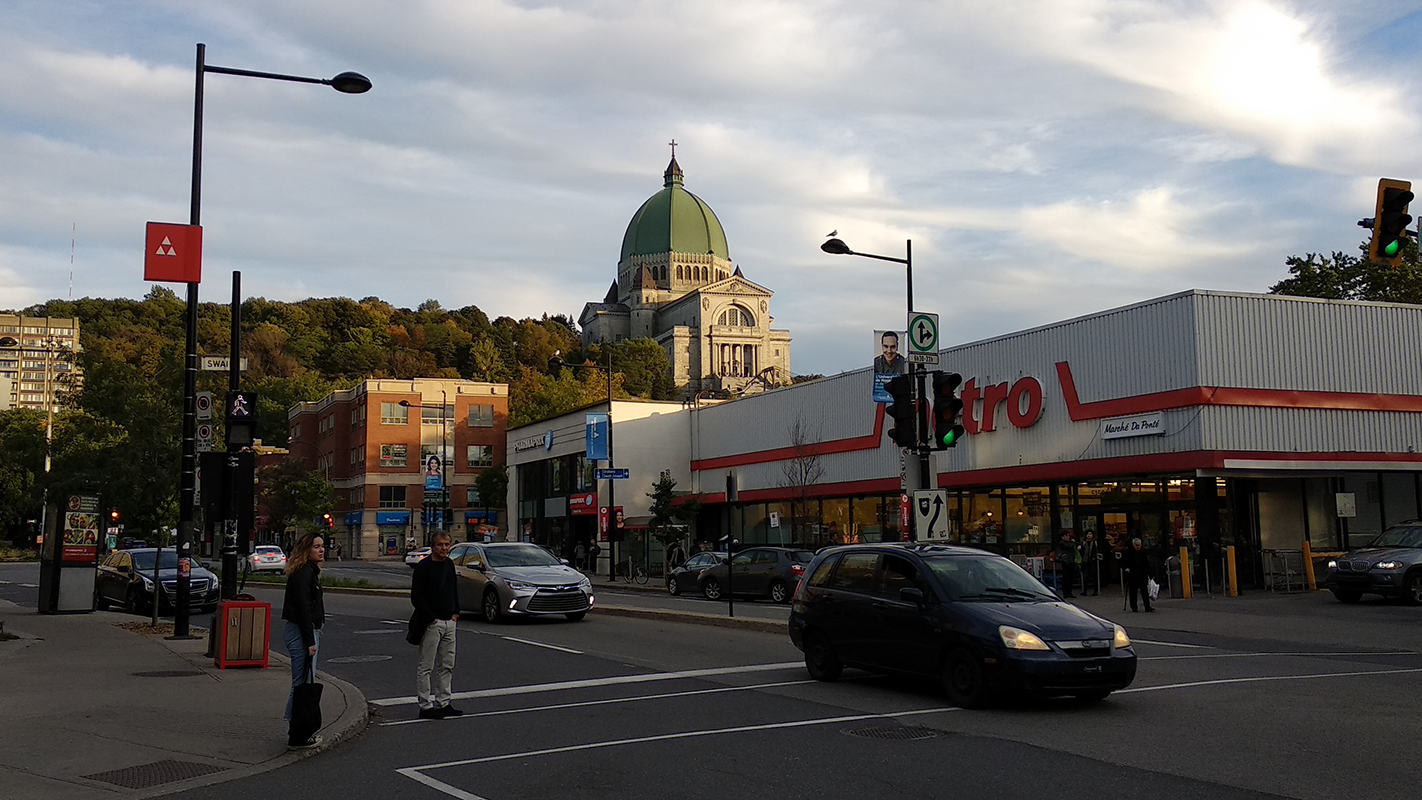 September 23rd started my first, solitary and pretty alienating week in Montréal. I was terrified by the first day of school, which in fact turned out to be terrible. All the fears that where hanging over my head fell upon me, as I couldn’t connect with any of my classmates. I felt like a failure and terribly out of place, so that it cost me a great effort to go back to school the second day. 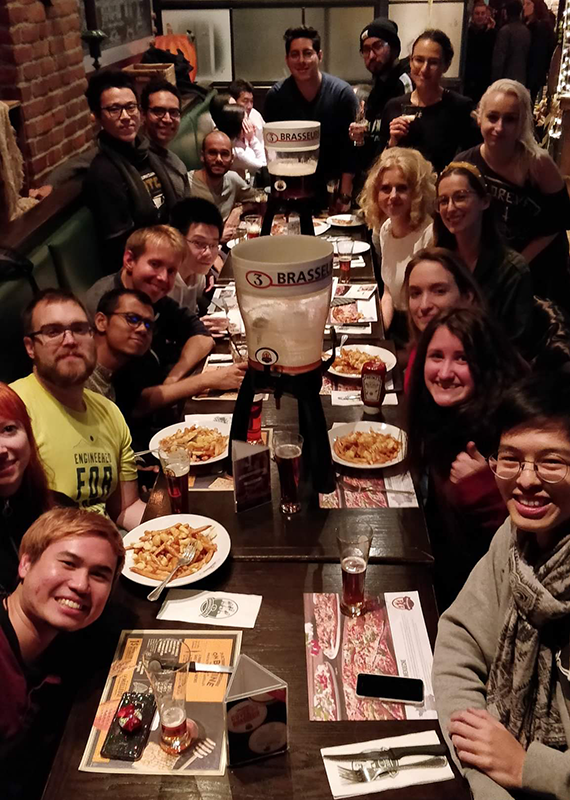 And that’s it. After I overcame that, everything started taking a good turn. I was doing the Inktober Challenge at the time: that happened to offer some conversation topics and, maybe, it also showed a friendlier side of me. As I spent more time in school, I started to be more like myself around my classmates, and slowly realized that I sincerely like all of them – which is quite amazing. I learned some pretty amazing life stories from all over the world. Mexico, Brazil, Canada, US, China, India, Thailand, Iran, Europe… We are 20, ranging from 17 to 30-something years old. Some decided to reinvent their lives after years in industrial design or architecture, some landed here first thing after high school with impressive determination. It was my first taste of the effervescent flow of young minds and hearts that gather in Montréal from all over the world – something that, before I knew it, I was falling in love with.

Our program started from the fundamentals of anatomy and perspective, in which I had thought, before getting there, that I wasn’t that bad (haha). In Canada, for the first time in my life, what I wanted to dedicate my life to was taken seriously. As I had to start from scratch an assignment for the fourth time in a row at 4 AM, as I was humbled by other people’s impressive work, as I noticed my first improvements, I felt more and more excited. There is potential all around me, and for once it’s not going to be wasted. I’m not hoping to get better, I KNOW I’m going to be. I want to throw myself out of the comfort zone as much as I can, because never in my life I’ve been more happy to fail and learn. 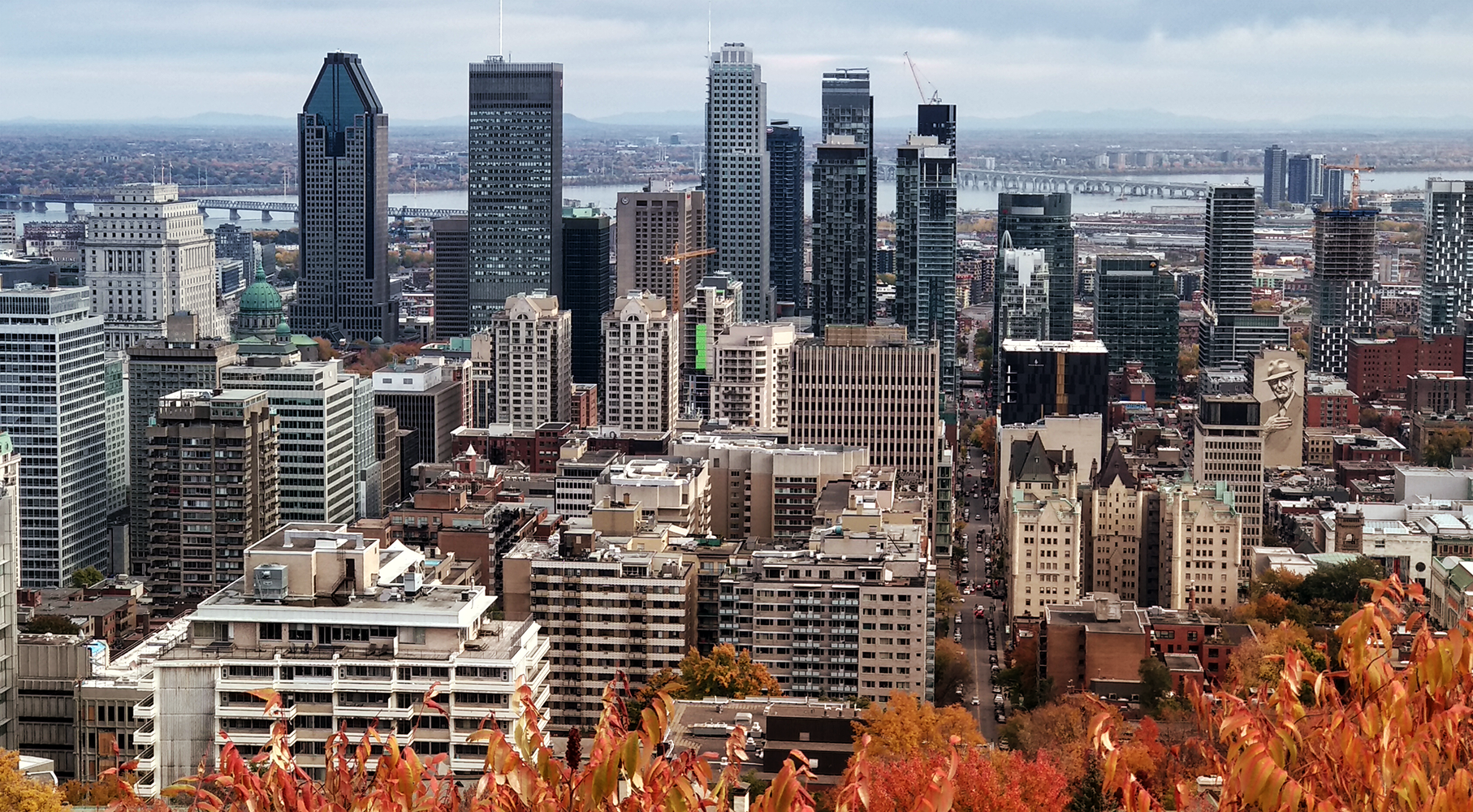 Part 2 – If it scares you, you probably should be doing it 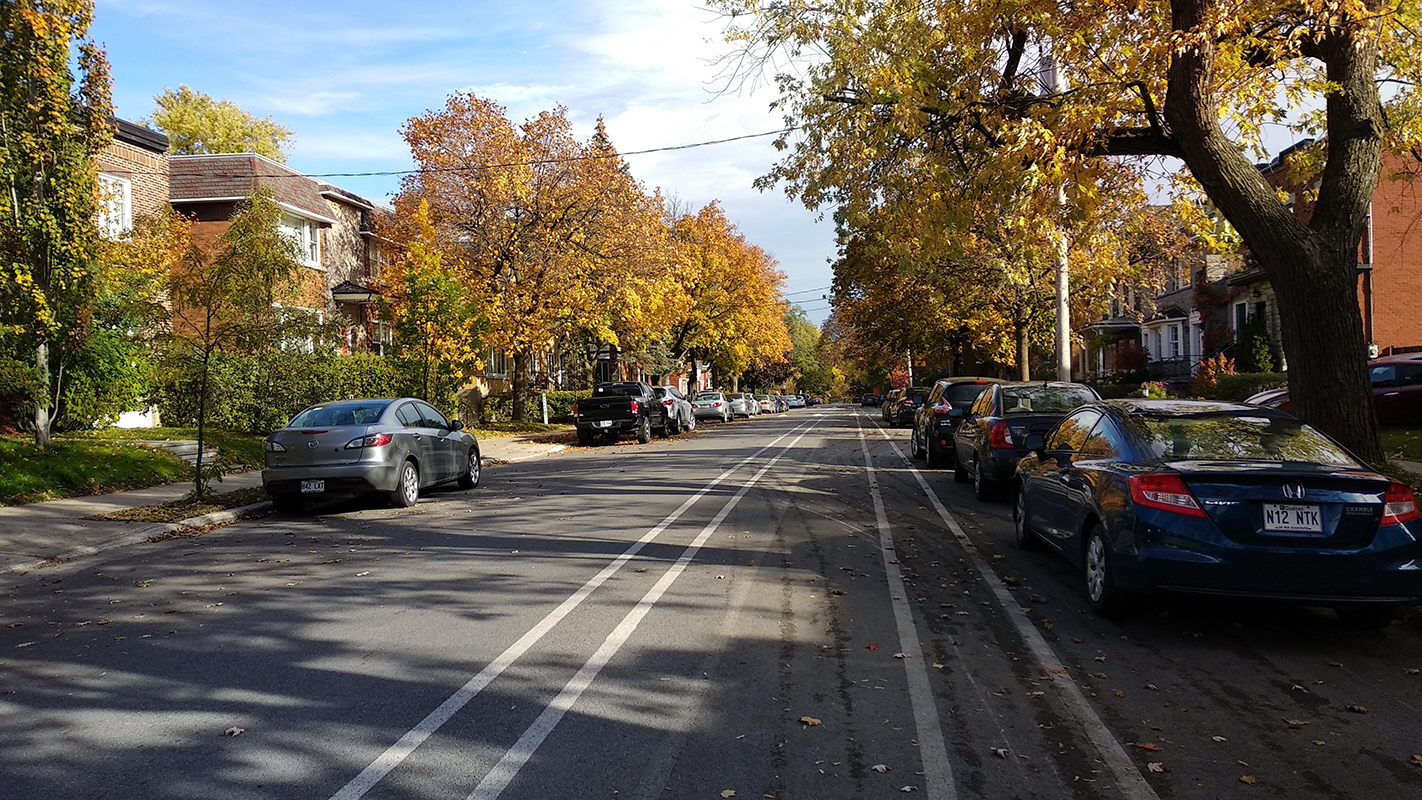 As the trees all over town started changing their leaves’ color into the burning shades of fall, I rode my cheap used bicycle and found myself smiling more often than I thought. I laughed whenever I remembered my seemingly flawless calculations before leaving. They were so off. I could have never imagined all the new possibilities and perspectives that I was able to discover by accepting some risk. I took note for the future that if something scares me, it’s probably because it’s something that I should be doing. And even if all goes wrong, there will always be more solutions to a problem than you could possibly think of before facing it.

I was sure that I would have hated spending all day every day in the claustrophobic class, in front of a screen, not having time to focus on anything else, sleeping too little… I approached all this with the resolve of a soldier going to the front. But most unexpectedly, I ended up loving that crowded school, the small kitchen, laughing at midnight with friends while trying to respect the deadlines. 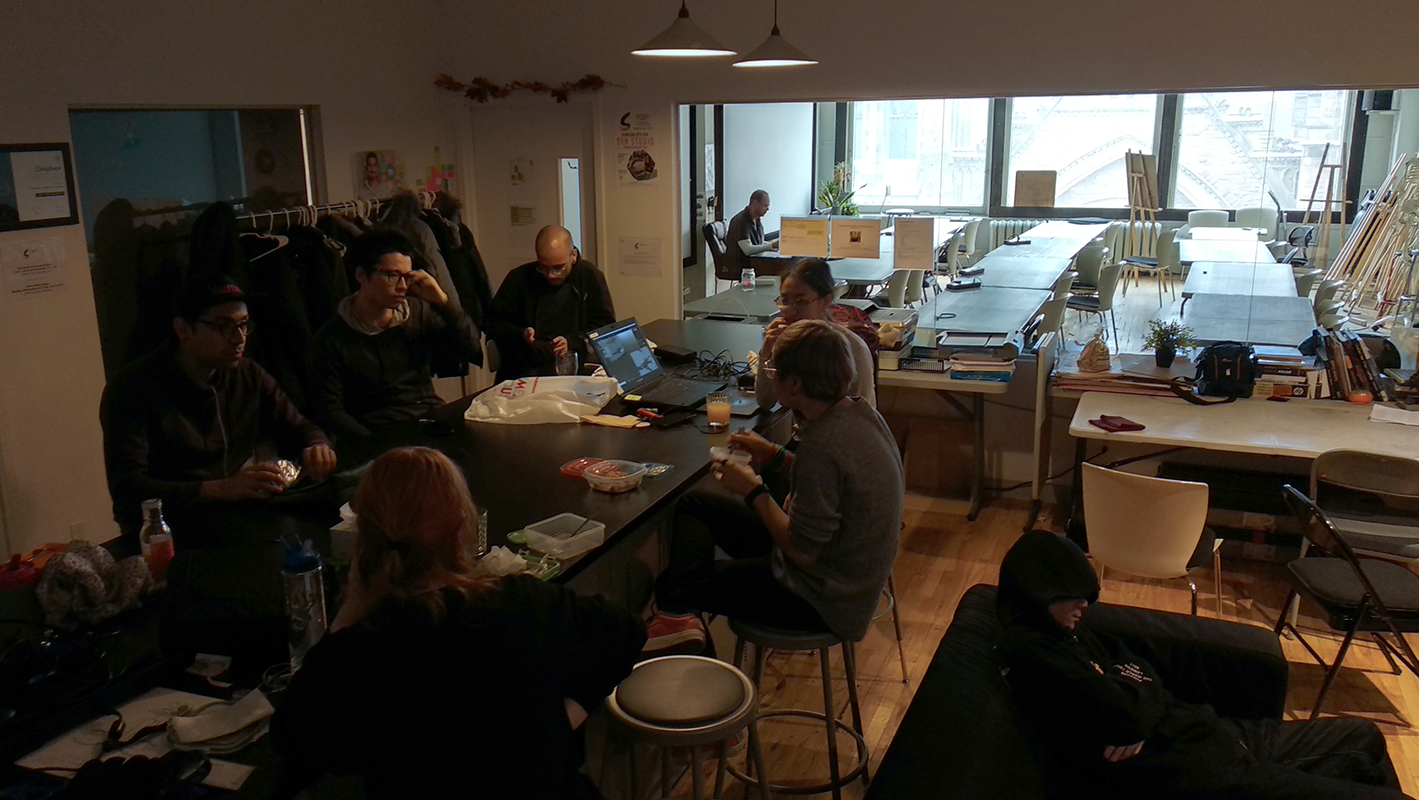 I saw a girl from the previous batch (they are in their 5th term now) sleeping on the class sofa and waking up with an alarm thirty minutes later, because that’s all that she could afford for the day. But instead of finding it terrifying I was motivated by it! I’ve never been this optimistic before. I look into the mirror with new eyes and for the first time I notice the mask of wrinkles carved by the disillusion, frustration and cynicism I was used to.

In November the first snow fell and the temperatures started to gravitate towards -8°. Around then we were asked to complete a “midterm survey” about the school. Used to the school surveys back in Italy, I started to get into the critique mindset. But it was kind of a shock when, pen in my hand, I realized that I had basically no complaints. We had four teachers and I LOVED three of them. Each day I tried to challenge myself as much as I could, together with many of my classmates: it was almost intoxicating.
I was learning Photoshop and Blender for the first time, had a very messy design workflow and terrible decision making skills because of my perfectionism (I… still have). Meanwhile, I still hadn’t developed a routine to live efficiently in the new continent. When assignments got more demanding, I tried to limit sleep to a steady 6 hours per night. But time just wasn’t enough. Many of us were demotivated by having to submit work that they were not satisfied with. During those weeks enthusiasm kind of vanished from everyone’s faces, replaced by tiredness. That’s when I did a bunch of stupid stuff. 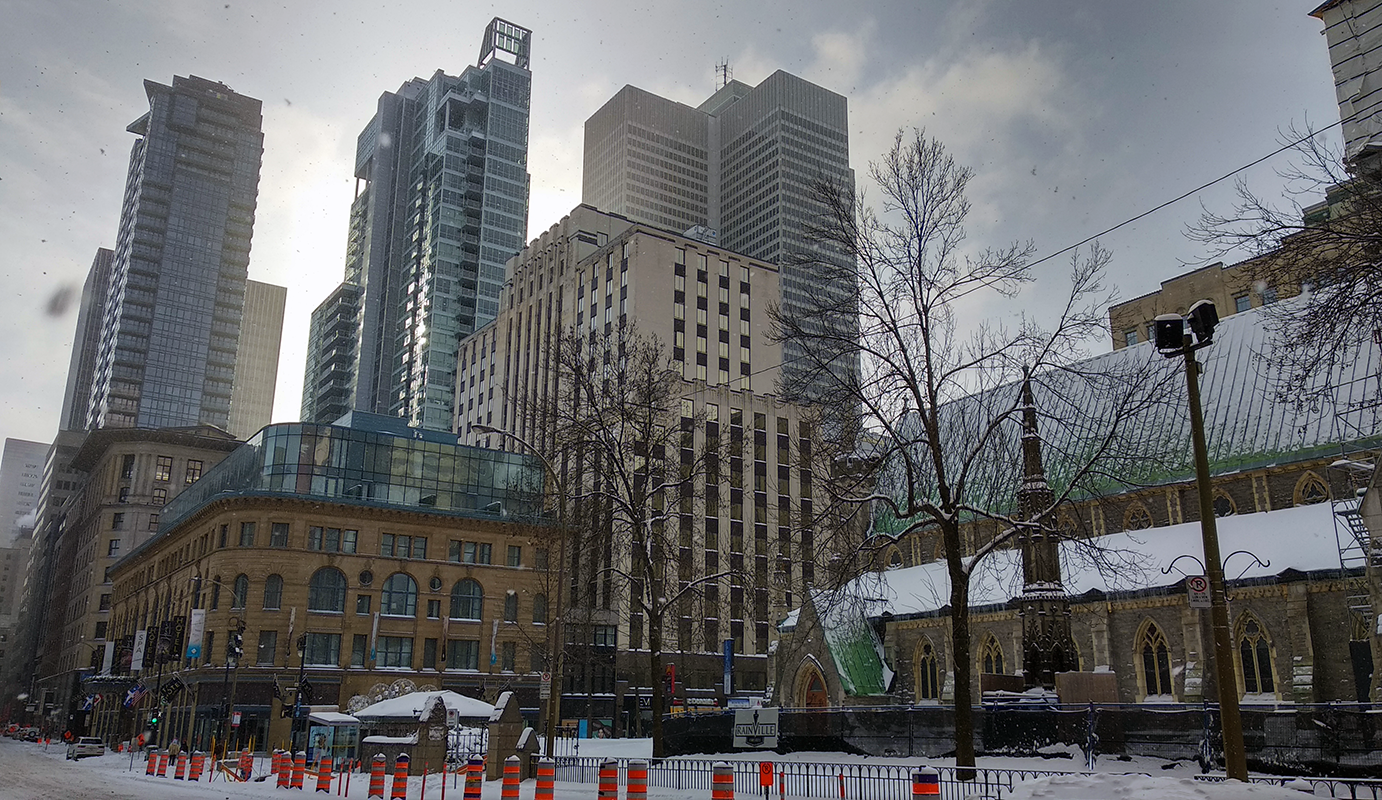 One night I locked myself out of the class, where I had left phone, jacket, wallet. I was the last one at school so I had to reach the security’s office and call one of the school managers to get the access code. Once I did that it was almost 1AM and I ran through a blizzard to catch the last metro train, which I inevitably lost. While I was figuring out how buses worked I got locked INSIDE the metro station. I called 911 and waited 40 minutes hoping that I got the entrance name right. Finally from the outside someone with the keys set me free again, in a freezing and deserted Montreal. I got home around 3 AM with a cab.
I lost the last metro another couple of times. It was less tragic, but the cold persuaded me to move my schedule back towards the morning.
I was mainly eating cabbages, rice, potatoes and biscuits. I lost 4kg without noticing. I also got sick of a stupid infection I have never had before and I didn’t have any antibiotics with me, so I had to figure out in a rush how doctors and prescriptions worked. I got to the point when I realized that I was too stressed. That was the first important lesson we all learned: it’s a marathon, not a sprint.

In December the assignment’s pace slowed down a little bit. But the main reason why I felt like I had more time was that my approach changed. We all reached a point beyond enthusiasm, too tired to worry, just going with the flow of our work and finding new enjoyment in it. 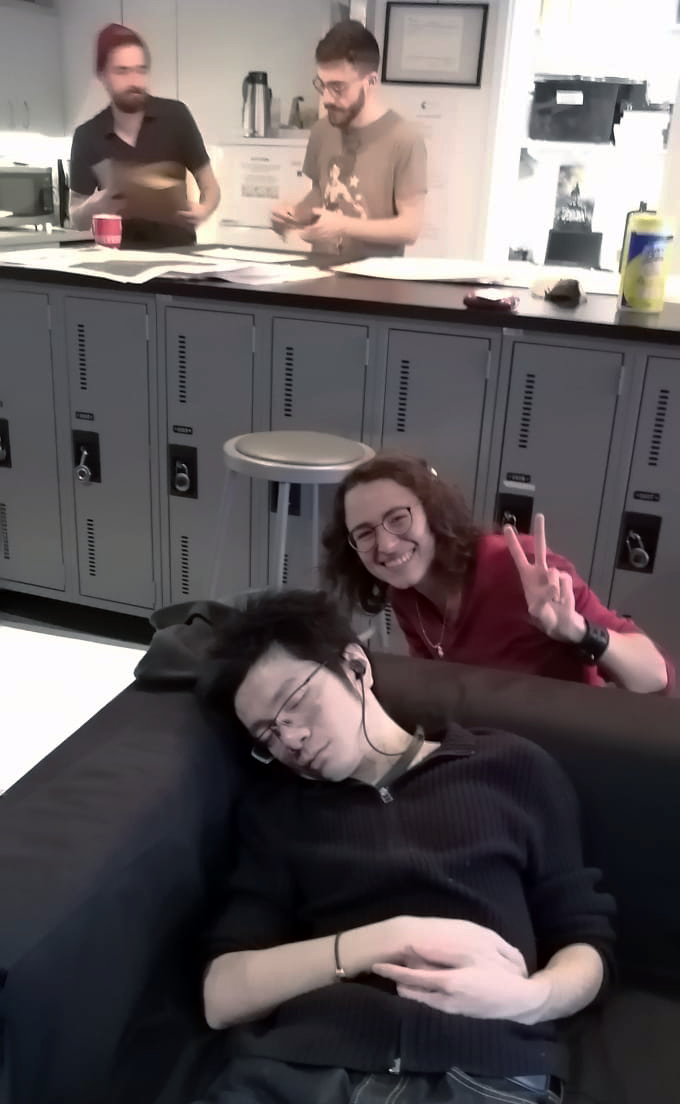 I was too exhausted to spend hours on each decision I had to make, wondering about which option was the best possible one for my project. It only took about ten other students and a couple of teachers to tell me that I was overthinking everything in my work, but then I started to listen, at least a little bit. I realized that perfectionism isn’t a virtue nor something that you can just laugh off and accept. Most of the time it’s a problem. Because it can prevent you from doing the most important thing: SOMETHING. It’s not crucial what it is, as long as it fits instructions and deadlines. The best way to improve fast is to fail fast, and perfectionism prevents you from doing it.

In the end I was kind of satisfied with my final assignments for this term. If you’re curious about what I did, you can find them here:

When the school stopped for Christmas break, it took me about two days of rest to feel fully recharged. After that, I was already missing school. I just can’t push myself to my limits in the same way, on my own. 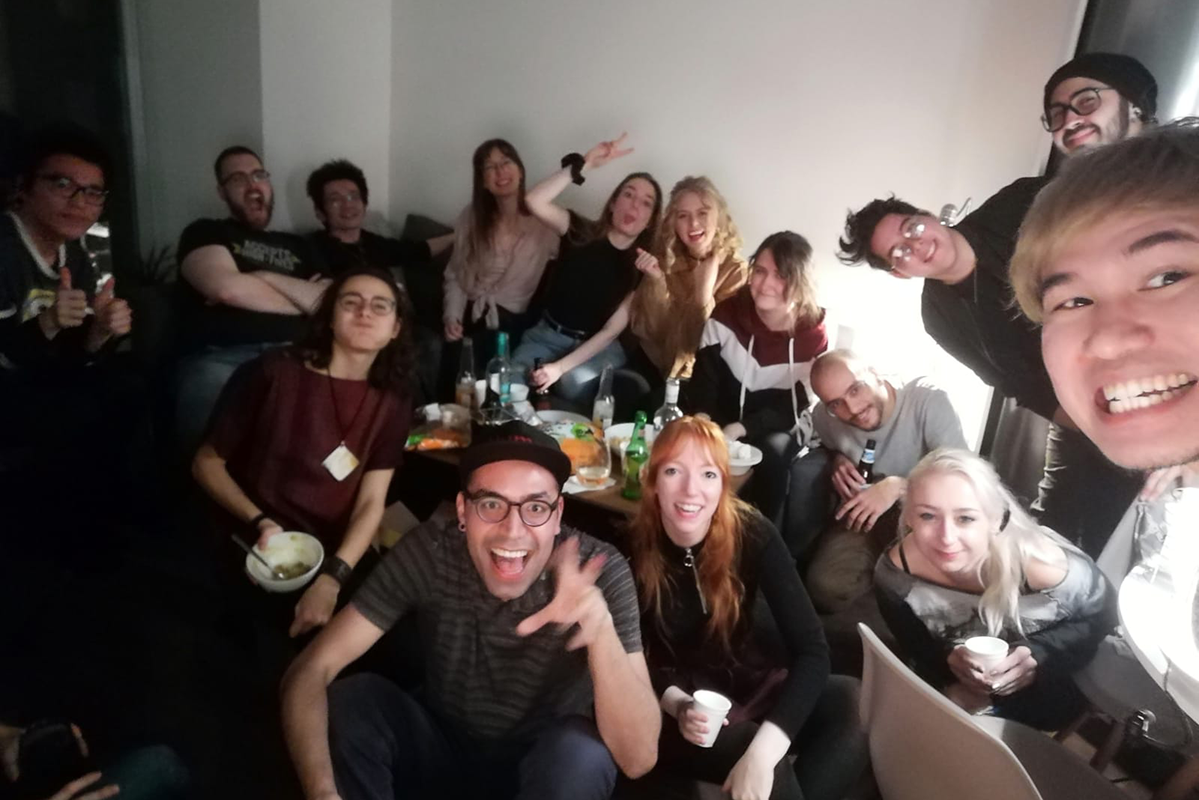 Instead I got on a plane back to Genova, and going home felt like stepping off a fast moving platform. Standing still gave me a bit of a vertigo as I realized how much Canada had already changed me. The recoil was pretty hard to handle at the beginning. But since this is the last time I’ll be here for who knows how long, I just try to embrace the blue skies and sea, and the wonderful people who, in this side of the globe, save a thought for me.

There is so much more to say about this couple of months. Many things I had to cut, some others are just impossible to write down. But I wanted to leave some trace of what I lived, especially since it’s unlikely that I will have the time to write anything else before next break, one year from now.

I could do the usual “what I learned” closing, but I don’t care about morals right now. Everything is unfolding faster than I realize, and the beauty of it is precisely that I can’t overthink it. Once you pluck out your roots everything becomes volatile. I have absolutely no idea of what I will do two years from now. But now I know that whatever it is, I can find a way to do it.